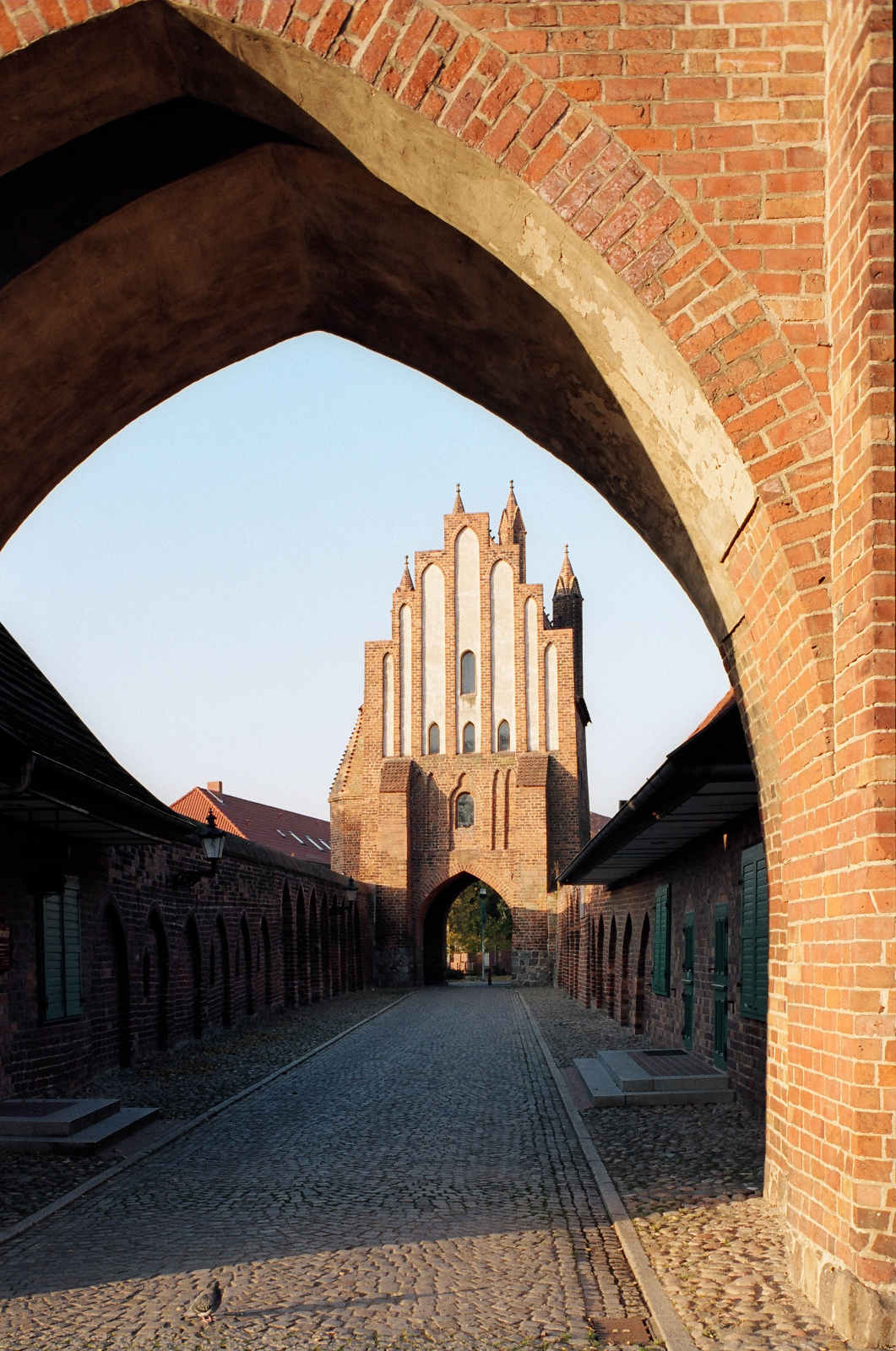 The structure of this gate illustrates perfectly the design of such medieval gateway systems. The layout of the Friedland Gate consists of a main gate on the town side and a front gate on the outer side. Both are connected by walls, forming the enclosed space of the Zwinger for attacking possible intruders. In front of the gate, there is a later addition to protect the gate against large-calibre firearms, the Zingel. This strong semi-circular structure was in turn connected to the front gate by walls, forming a further Zwinger.
The double gate system of a main gate, a front gate plus the Zingel and the respective connecting walls gave the Friedland Gate an overall length of 88 metres.

The architecture of the Friedland Gate reveals several construction phases.
The three-storey main or inner gate has a square ground plan. On its outer side facing the Zwinger, it still shows elements of the transition from the Romanesque to the Gothic style. This is the oldest part of the complex, dating from around 1300.
The western façade on the town side with its attached polygonal stair tower, on the other hand, was built somewhat later in already distinct Gothic style at the end of the 14th century. It is richly structured with blind niches, embrasure-like window openings and an ornate pillar gable.
The roof truss of the main gate has been dated to 1394.

On the Zwinger side of the main gate, the two guide pillars for the portcullis are clearly visible. In addition to the portcullis, the main gate could also be closed on both sides with large twin-leaved doors, thereby providing threefold protection for the gateway. The wrought-iron door hinges are still in place.

Zwinger walls connect the main gate to the front gate. The gateway of the main gate has a pointed arch typical of the Gothic period. Inside, a cross-ribbed vault used to cover the thoroughfare. Today, only rudimentary traces of this vault are still visible.

The different workmanship of the inner blind arches on the walls of the Zwinger also shows two construction phases with a discernible masonry seam. There was probably a palisade at this point, perhaps with a wooden gate or a drawbridge. The wooden structure would have been demolished only once the front gate had been completed.

The surviving Zingel structure is part of the front gate. It was located in front of the double gate complex of the Friedland Gate. Built shortly before the Thirty Years’ War, this structure was intended to provide additional protection for the gate. On the city side, the building had deep segmental arched niches and on the outer side it was equipped with embrasures. The walls that once connected it to the front gate were demolished in the 19th century.

During the Thirty Years’ War, General Tilly stormed the Friedland Gate from the city side. His imperial troops had gained access to the city through a breach in the wall next to the gate. There is a plaque on the northern wall of the Zwinger commemorating the events of 1631, when the Friedland Gate was taken and the garrison cruelly massacred during the storming of the city.

In the 18th century, small half-timbered houses were built into the walls on both sides of the Zwinger. The princely tax collector lived here (using his house as a customs house), as did the gatekeeper and the guard of the Zingel.
The Friedland Gate leads east to Friedland (Mecklenburg), from where it takes its name.