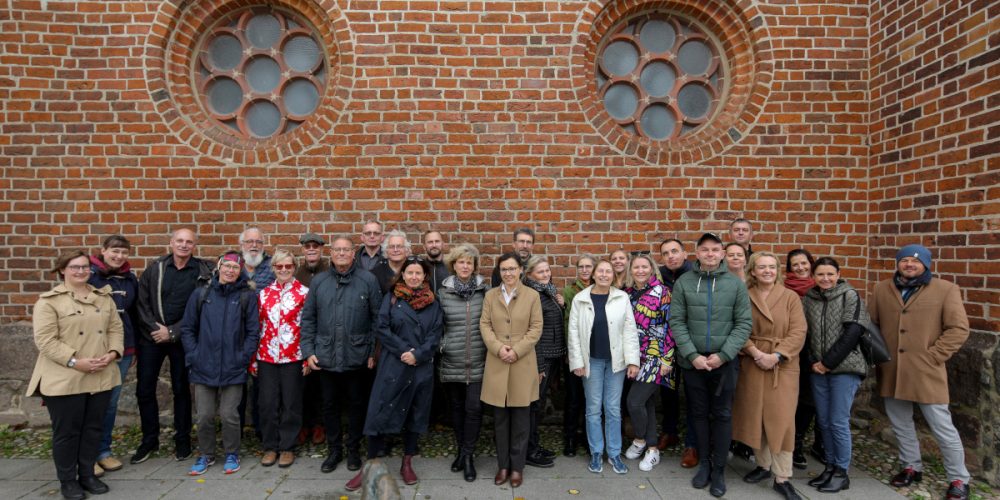 This year’s General Meeting of members of the European Route of Brick Gothic was held for the first time in the City of Four Gates Neubrandenburg.

How did the visit come about? I vividly remember how — we made the commitment back at the General Meeting of members 2017 in Greifswald:
“2020 in the City of Four Gates Neubrandenburg and Burg Stargard. We will be happy to see you there.”

Well, that was the plan. But the measures to contain the coronavirus threw a spanner in the works. Still, better late than never. So, this year we made up for the General meeting we had missed out on, and Neubrandenburg and Burg Stargard’s Brick Gothic took centre stage for three days.

Working closely with our former heritage conservator Marie Mamerow and Mr Saß from Burg Stargard, I had great pleasure in putting together the programme for the three-day General meeting.

We had it all in the bag … well, not just proverbially — the souvenir gifts from the City of Four Gates were being just packed, and the event was about to begin.

With great anticipation, I drove to the bus station on the 20th of October 2021, and I welcomed the first participants. Our first stop was the castle in Burg Stargard. It was an entirely successful first evening, with an inspiring guided tour and a delicious dinner at the castle.

The meeting continued on Thursday in the seminar room in the heart of Neubrandenburg. We had a full agenda and started right on time with the public part of the General meeting. I particularly like this tradition of each member reporting on their localities, especially the combination of heritage conservation work and marketing. It’s always inspiring to see what’s happening in the various places. This can also fuel your own think tank 🙂

The public and non-public parts of the General meeting went smoothly, and I was curious to see how our evening reception in the Concert Church would go down with the participants.

At 6.30 pm sharp, Mr Tepper and I open the doors of the most beautiful building of the City of Four Gates: our Concert Church.
Apart from culinary delights, we also enjoyed beautiful organ music. The queen of musical instruments lived up to its reputation and the organist, Mr Bitto, received a rapturous round of applause. We ended the evening together in the enchanting ambience of the Concert Church.

On the third and last day, Neubrandenburg was autumnal and rainy, but that didn’t stop us from taking a wonderful tour guided by architectural archaeologist Dirk Schumann along the medieval ramparts. You know what they say: There is no such thing as bad weather, just bad clothing 😉

So, that was all Neubrandenburg had to offer? No, of course not.
A visit to the oldest monastery is something not to be missed out on. Dr Voß took us on a historical journey through the Franciscan monastery of the City of Four Gates.

Three days went by so fast…
What remains for me to say? … I was very pleased that this year’s General meeting could take place in my hometown of Neubrandenburg.

I would like to extend my thanks to all our guests for allowing us to present our favourites of Brick Gothic to you. It was an honour to spend time with you here, and I hope you gained some good insights. Eiko, thank you very much for the impressive pictures. You did an outstanding job again.

Special thanks also go to all those who supported me in the preparations for the General meeting of members.

I look forward to many more interesting and creative years together with you in the European Route of Brick Gothic association.