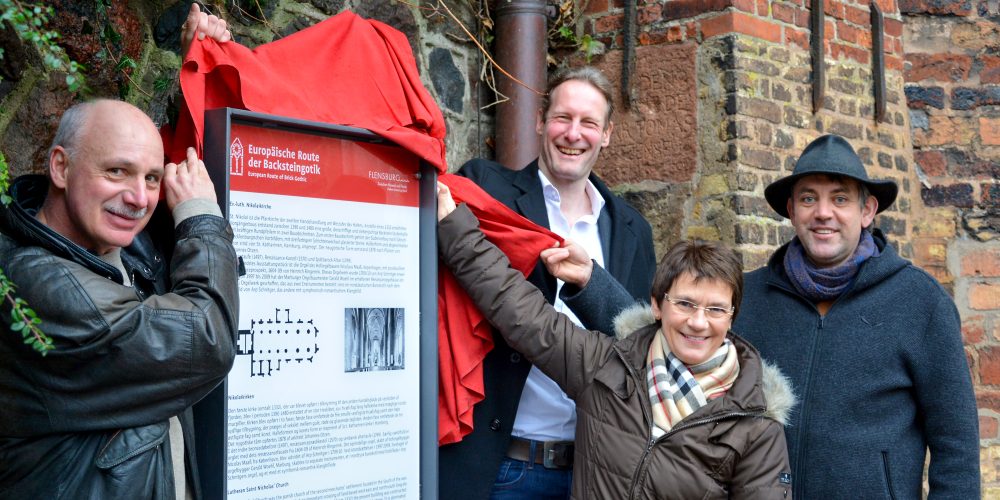 Photo, from left to right: Monument curator and European Route of Brick Gothic Association board member Eiko Wenzel, Tourism Manager Gorm Casper (from the Flensburger Förde tourism agency), Pastor Sylvia Fuchs from St. Mary’s, Pastor Dr Marcus Friedrich from St. Nikolai Cathedral.
The information boards in the design of the European Route of Brick Gothic were unveiled in front of the Nikolai Church. On the right, you can see the typical polychrome brickwork of the southern vestibule of St. Nikolai, built at the beginning of the 15th century according to models from the Lübisch-Mecklenburg area. © Anja Pfaff

The new year is just around the corner and with it comes a great number of tourists visiting Flensburg in 2019. But there’ll be something new for the locals as well as the tourists this year. Five information boards have been fitted on some of the city’s characteristic Brick Gothic buildings. Tourism Manager Gorm Casper ceremoniously unveiled the information boards yesterday. Now, the public can read these boards and find out more about these typical medieval buildings at St. Nikolai Cathedral, St. Mary’s Church, St. John’s Church and the Church of the Holy Spirit as well as the Nikolai Apotheke.

The Brick Gothic style has shaped the entire Baltic Sea region and the adjoining inland like no other building period. Nowadays, Brick Gothic buildings can be mostly found in northern Germany, Poland and Denmark. Ever since the time when national borders within Europe no longer posed a barrier to travel, cities from these countries joined forces in a European project. Created in 2007, the “European Route of Brick Gothic” Association was set up with the ambition to pool their resources and raise awareness of the cultural heritage of Brick Gothic among the public. The aim of the Association is to promote cultural tourism and the exchange of information between countries and cities on issues relating to the maintenance, preservation and research of cultural heritage.
Flensburg has been part of the Route of Brick Gothic since 2014 and has a lot to offer to the project in the form of the late Gothic merchant’s house, the “Nikolai Apotheke” at Südermarkt and four medieval churches. The new information boards, which are designed to match the uniform brand of the Route of Brick Gothic, provide information about the most important aspects of history as well as the decor and special features.

Gorm Casper, Flensburg’s Tourism Manager, and monument curator Eiko Wenzel, who represents Flensburg on the board of the “European Route of Brick Gothic” Association, are pleased that the new boards represent a further step towards making Flensburg more interesting for tourists who are interested in culture. “Tourists who are interested in culture should pay a visit to the four inner-city churches of St. Nikolai Cathedral, St. Mary’s Church, St. John’s Church and the Church of the Holy Spirit as they are key cultural locations”, says Eiko Wenzel. The pastor of St. Nikolai Cathedral, Dr Marcus Friedrich, also adds: “If we identify our churches as significant locations for culture and tourism, this makes our churches places of interest even outside of church services and concerts.” St. Nikolai has been pursuing the concept of an “open church” for a number of years now, with several thousands of visitors coming in and out each year. Friedrich says: “At the end of the day, it’s clear that as church congregations we are also responsible for preserving this cultural heritage. We’re happy to receive the boards and are delighted to have the opportunity to show our treasures off to locals and guests alike.”