General meeting in Chorin and Eberswalde 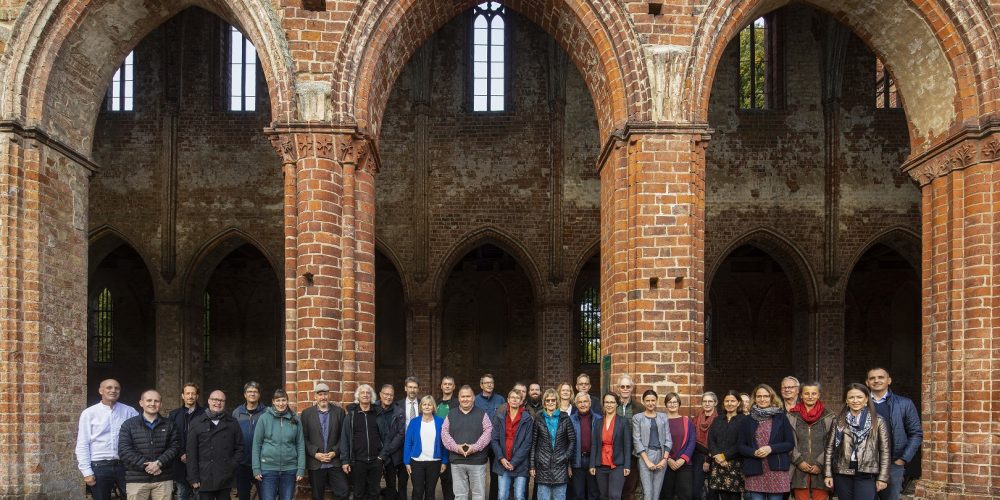 In July 2017, the city of Eberswalde and Chorin Monastery joined the European Route of Brick Gothic association, a registered non-profit organization, together as a joint full member.

Five years later, they hosted the 16th general meeting of the association. Splendid, late summer weather set the scene when a group of over 30 members from Germany and Poland met first in Chorin, then in Eberswalde.

A rich cultural program went with the meeting, allowing the group to visit outstanding brick Gothic monuments and to exchange ideas with their specialist colleagues directly on site.
In addition to Chorin Monastery, the focus was on St. Mary Magdalene’s Church in Eberswalde.

The first two days were spent in Chorin. Globus Naturkost from Eberswalde took excellent care of the catering on the day of the general meeting. On the third day, the members travelled from Chorin to Eberswalde courtesy of a shuttle provided by Taxi Wutskowsky.

“We are delighted that the mayor of Eberswalde, Götz Herrmann, found the time to welcome us in person. This is not a matter of course and means a lot to our association,” Dr. Edith Kowalski, Managing Director of the European Route of Brick Gothic, said.

City planner Karen Oehler and Dr. Georg Werdermann, head of the Office for City Marketing and Tourism, guided a varied tour of Eberswalde, which gave the members a chance not only to discover the town’s history and architecture, but also some beautiful, lesser-known spots. Afterwards, the group followed an invitation to Café Gustav for a lunch break.

Feeling well refreshed, the group then headed to the St. Mary Magdalene’s Church, where Pastor Hanns-Peter Giering treated the European Route of Brick Gothic to what will probably be the last guided tour of his tenure before he goes into well-deserved retirement.
As a crowning finale to the general meeting, Pastor Giering took the members on a fascinating tour of the church, during which he pointed out many exciting details and even allowed the members all the way up to the roof truss. It was great to see that St. Mary Magdalene’s was restored to its former glory after being severely damaged in the church fire of 2019.

The members of the European Route of Brick Gothic agree: “We enjoyed our stay in Chorin and Eberswalde very much. We will gladly come here again!”