post-title The Hospital Chapel of St. George in Eberswalde

The Hospital Chapel of St. George in Eberswalde 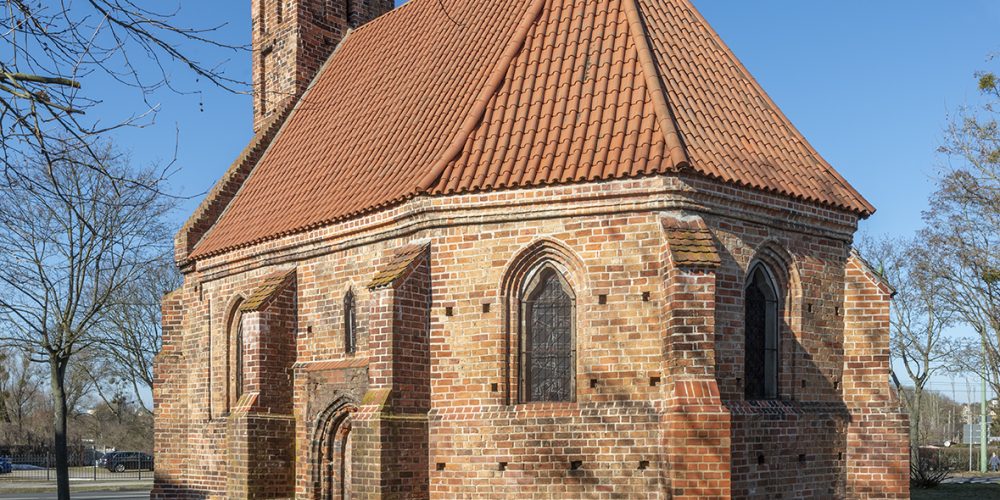 The significance of Eberswalde grew considerably when Albrecht II made the town a place of power of the Brandenburg margrave. In addition to the representative development of the town church of St. Mary Magdalene, the administrative relocation of an important trade route via Eberswalde is indicative of the contents of a margravial document sealed in 1317. The increasing traffic on this road, which also passed the nearby Chorin monastery, eventually became an important basis for the foundation of St. George’s Hospital outside the gates of the town.

The exact date of the foundation is unknown. The first mention of an altar in the leprosarium chapel of St. George was in 1359. In 1360, the altar received a further donation. By 1370, the chapel already enjoyed such good financial standing that it could provide money for the construction of the tower of the Eberswalde town church.

There are also no written sources for the construction of the hospital chapel — today the only surviving building of the hospital. Friedrich Alder, a 19th century building archaeologist, dates this building to the middle of the 14th century because of its “simple and austere construction forms” and the “excellent technique”, an assessment shared by later authors.

Only recent dendrochronological investigations have made it possible to date the chapel more accurately. Despite many wars and its location at the gates of the city, the medieval roof of the chapel has survived from the time of its construction. The studies have shown that it was built soon after 1381.

The small chapel is an elegant two-bay brick building with a three-sided east end. Together with the west wall, a small and slender bell tower was built. The pointed-arched west portal with profiled embrasure may have been the entrance for the lay public in the days of the hospital. The south portal, also with profiled embrasure, led to the former hospital buildings. The buttresses from the time of construction testify to the initial plan to vault the chapel. The existing cross-ribbed vaults have relief keystones and corbels made of brick, although some original corbels have been lost and replaced by mortar stucco. The interior walls have twelve segmental arched wall niches. The number twelve refers, among other things, to the number of the Apostles, who also served as a model for hospital communities.

The medieval painting with tracery ornaments was covered in whitewash no earlier than 1900. So far, only a few remains of this painting have been uncovered.
The chapel was secularized during the Reformation and later used as a store. Thereafter, some visitors to the chapel immortalized themselves by scratching inscriptions into the embrasure of the western portal. The oldest inscriptions date to the 17th or 18th century with one of them showing the year 1829.

In 1929/30, the chapel room was repaired and opened to the public. The next repairs took place in 1950 and 1955 when the municipal museum took seat in the chapel. The coloured glass windows we can see today were inserted during the 1972 restoration, when the chapel became a small concert hall. In 1993 and 2020, the chapel underwent further structural safeguarding.